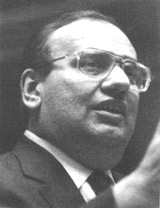 The Puerto Rican/Hispanic Youth Leadership Institute is named in honor of Angelo del Toro. Assemblyman del Toro captured in his life and work, the ideals and determination that bring us together in Albany each year. The Institute is a product of his vision and energy. Assemblyman del Toro died on December 30, 1994, at the early age of 47. His vision for the Youth Leadership Institute will remain one of his finest legacies to the people of New York State.

Young Hispanics can always look to Angelo del Toro’s life as an example of what is possible for those who believe in themselves and their potential. He was a student at Brooklyn Technical High School who then worked his way through City College and New York Law School. He was a Democratic Party leader in his district at the early age of 25. He then became Special Assistant to the President of the City Council and at the early age of 27 was among the youngest members ever elected to the New York State Assembly.

Angelo del Toro’s service to the family of New York during his 20 years in the Assembly went well beyond his commitment to the people of the 68th District. He was the first Hispanic Chairman of the Black and Puerto Rican Legislative Caucus, Chairman of the Social Services Committee for 10 years, and Chairman of the Assembly’s Education Committee from 1990 to 1994. In all of these posts, he sought to nurture the unity, conscience and aspirations that are at the heart of any just and caring society.

Angelo del Toro’s voice of reason and conciliation is greatly missed. Thanks to his sacrifice and faith in the future, we have this annual testimony of hope in each emerging generation – “SOMOS, Inc.”. There can be no better tribute than this Institute to his memory.